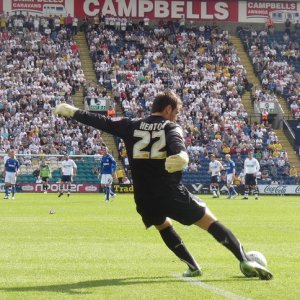 Bluebirds midfielder Peter Whittingham fired home a low cross from Craig Bellamy in the sixth minute of a first half that the visitors dominated.

With Crystal Palace beating Leeds by the same scoreline at Selhurst Park, Preston knew they needed a major turnaround in the second half of both games.

Sadly for Brown, it did not happen and Preston were condemned to a return to the third tier of English football for the first time since 2000.

Brown, 51, arrived at the famous old Lancashire outfit in January, tasked with keeping them in the second tier but it took him 13 games to register a win and, despite an impressive rally in recent weeks, it was not enough.

The result marked Preston's first relegation in 18 years but the visiting supporters could not care a jot as they celebrated a vital victory which would have been far more comfortable but for some poor finishing and excellent goalkeeping from Preston's Iain Turner.

The 'Great Escape' was played over the tannoy prior to kick-off but any optimism that may have created among the home supporters was quickly dashed when Cardiff took the lead.

Whittingham's neat pass allowed the impressive Bellamy to break clear of a statuesque home defence down the right flank.

The on-loan Manchester City striker looked suspiciously offside but he kept his composure and showed intelligence to square a low cross across the face of goal. Whittingham arrived to sweep the ball into the roof of the net and Cardiff could easily have been out of sight at the break after fashioning a series of decent openings.

In the 16th minute, Bellamy hit a shot from distance which deflected off Leon Cort and dipped just over Turner's crossbar.

From the subsequent corner, Bluebirds defender Dekel Keinan headed narrowly over and in the 20th minute Jay Bothroyd claimed a penalty after taking a tumble under the challenge of Turner.

In the 28th minute Bluebirds left-back Jlloyd Samuel and Preston striker Iain Hume clashed in a full-blooded challenge which resulted in Hume being replaced by Darel Russell several minutes later.

Yet as the interval approached, the pendulum swung in Preston's favour and Chris Brown headed a cross from Ian Ashbee against a post.

Whittingham then missed a golden opportunity to put Cardiff 2-0 ahead in the 41st minute when he blazed Bellamy's low delivery high and wide from just six yards out.

The hosts then had two penalty appeals turned down by referee Phil Gibbs, prompting Brown to encroach on to the pitch to voice his anger, but Cardiff went on to spurn a host of openings.

Olofinjana headed wastefully over and then Burke was denied by the outstanding Turner after he broke clear of the home defence while Preston, despite five minutes of added time, could not find an equaliser.