Cardiff launched a fantastic late comeback to nick a 2-2 draw at Reading in the Sky Bet Championship on Monday night.

An own goal from Callum Paterson and Mo Barrow's deflected strike had put Reading in control, but Cardiff hit back in the final 10 minutes with goals from Joe Bennett and substitute Lee Tomlin.

The result moves Cardiff back to four points behind leaders Wolves, while Reading missed the chance to climb into the top half, instead rising to 14th.

Cardiff started brighter but proceeded to gift Reading the opener after 16 minutes, as Paterson rose at the near post and, under very little pressure, nodded Liam Kelly's corner past his own goalkeeper. 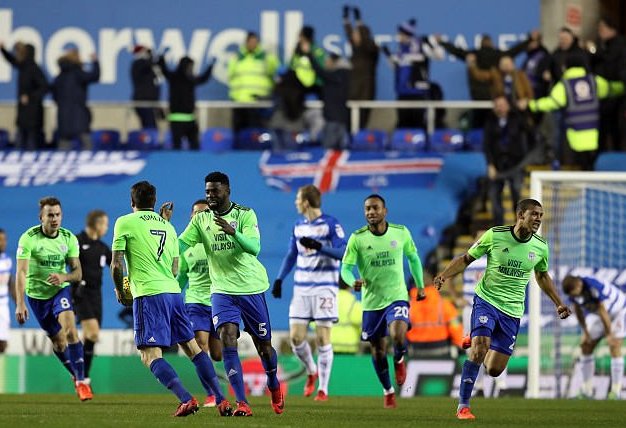 And there was also a touch of fortune about their second goal after 41 minutes as Lee Peltier, on for the injured Sean Morrison for Cardiff, could only head a corner as far as Barrow on the edge of the area, and his low strike took a couple of deflections before beating the helpless Neil Etheridge.

Neil Warnock, clearly frustrated with his side's ability to get back into the game, was sent to the stands in the second half after one too many exchanges with the fourth official, but his side did then rally.

First it was Bennett, who slammed a fine first-time volley home in the 83rd minute, then it was Tomlin who bagged the equaliser from close range in the first minute of stoppage time, although the referee did need goal-line technology to confirm the ball had crossed the line after it bounced down off the crossbar.

From that point, it could have gone either way, and Reading came within inches of claiming a winner, but Paul McShane, whose weak clearance had led to Bennett's goal, failed to redeem himself as his header hit the post and bounced wide.

A battling display by Ralls was a key part of Cardiff's late comeback. Overwhelmed by Reading's passing game at times in the first half, the midfielder helped the Bluebirds get a grip on the game after the break and fight their way back for a draw.