Sheffield Wednesday strengthened their grip on the final Championship play-off place with a hard-fought 1-0 victory over Cardiff.

The Owls, who were high on confidence after a 2-1 victory against Newcastle last weekend, dominated proceedings from the start but failed to convert any of their early chances.

However, substitute Fernando Forestieri struck late on to snatch all three points. 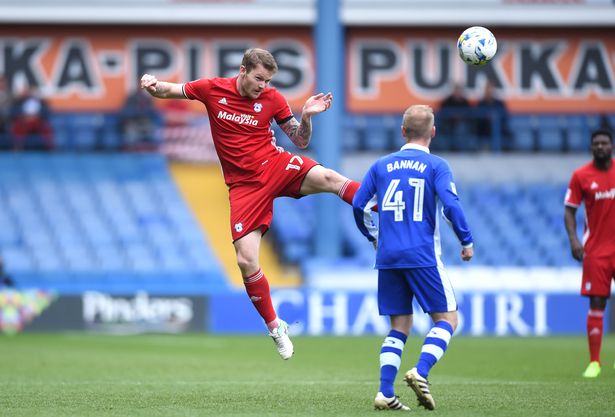 Defeat for Cardiff means they have gone five away games without a win.

Ross Wallace had the first chance of the afternoon when he cut inside on his left foot and struck the ball hard and low, but Bluebirds goalkeeper Allan McGregor managed to push it on to the post to stop his side from conceding an early goal.

Five minutes later, Cardiff midfielder Joe Ralls had a similar effort from outside the box but his shot was straight at Keiren Westwood in the Wednesday goal.

Jack Hunt had made a long run into the box and went down under pressure from Cardiff winger Kadeem Harris, however referee David Coote waved away the home side's appeals.

The visitors then had a great chance to take the lead

After some good hold-up play from Kenneth Zohore, he played Ralls through on goal but the midfielder's shot was saved well by Westwood.

The referee had another big decision to make just before half-time when Junior Hoilett appeared to raise his arms to Daniel Pudil after a tough challenge, but he escaped with a yellow card and the teams ended the half goalless.

Both sides struggled to create clear-cut opportunities for the opening 15 minutes of the second half and Wednesday boss Carlos Carvalhal reacted by introducing forwards Jordan Rhodes and Forestieri in place of Gary Hooper and David Jones.

Hunt made a bursting run into the box and got past full-back Joe Bennett before attempting a low-cross into the box which was deflected on to Cardiff's near post.

Substitute Forestieri tried his luck from range with a free-kick before Bannan attempted to score from distance too, neither of which troubled McGregor in goal.

Wednesday's substitutes then came to the rescue

Rhodes smashed a shot towards goal and McGregor produced a fine reaction save, but he was powerless when Forestieri ran in to drill home the rebound and put the home side in front after 84 minutes.

The visitors made two swift changes of their own in an attempt to grab an equaliser, but they failed to trouble the hosts and Forestieri's late strike proved to be the winner