Cardiff salvaged a point in dramatic fashion against Stoke in a 3-3 thriller at the bet365 stadium. 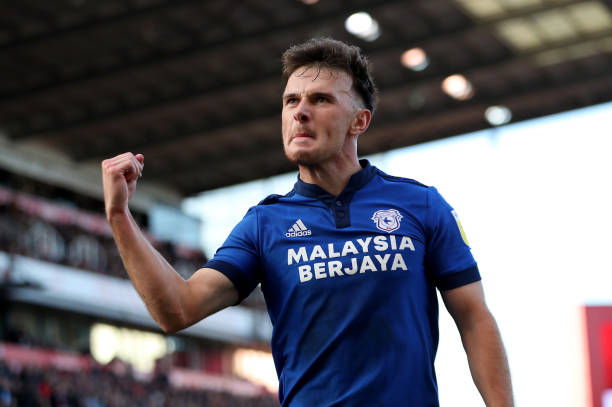 Steve Morison, Cardiff's caretaker boss, found his side 3-0 down in his first game in charge but goals from Rubin Colwill, Mark Harris and Kieffer Moore rescued a point.

The three Cardiff goals came in theatrical style as they turned it around in the space of five minutes in the second half.

Colwill's strike from distance snuck underneath Joe Bursik - who should have done better - to kickstart the comeback.

Cardiff then capitalised on a poor pass from Josh Tymon which was intercepted by Moore. Moore then squared it for Harris to neatly finish and make it 3-2.

After failing to take advantage of a glorious opportunity in the first half, Moore made it count when it mattered most. Ryan Giles found space down the left flank and played in a low-driven cross along the face of the goal to find Moore at the back post and he slotted comfortably into an empty net.

Jacob Brown's near-post header had given Stoke the lead inside the opening 10 minutes. Cardiff failed to pressure Ben Wilmot who took his time and clipped a ball into the 18-yard box for Brown to powerfully head past Alex Smithies.

Steven Fletcher then doubled Stoke's lead in the 16th minute after his strike from distance deflected off Mark McGuinness to wrong-foot Smithies who dived to the opposite side of the goal.

Initially, it was an excellent ball from Harry Souttar to pick out Brown behind Cardiff's back three. Brown turned, laid it off to Fletcher who then let rip.

Exactly 33 seconds into the second half Stoke scored another to make it 3-0 and Fletcher got his second of the game.

Brown was involved once again as he picked out the striker who elegantly chipped over Smithies. Jordan Thompson won the ball for the Potters and they took advantage.

While Stoke boss Michael O'Neill will be devastated his side gave up a 3-0 lead, it's a promising sign that Fletcher finally put an end to his goal drought and scored his first goals of the season. Especially with Nick Powell out for six to eight weeks.

The result means Cardiff have taken their first point since September as they put an end to their eight-game losing streak. For the Potters, their poor run of form continues as they are now five without a win.