Swansea piled the pressure on Cardiff manager Mick McCarthy as a 3-0 thrashing in the South Wales derby raised yet more questions about his future. 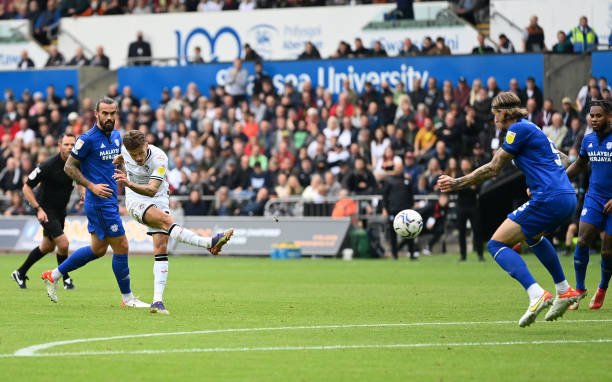 Cardiff's sixth consecutive defeat was their most painful in a game where they rarely laid a glove on their nearest rivals, and saw less than 30 per cent of the ball en route to a comprehensive defeat.

The normally goal-shy Swans, who had scored only nine goals in their opening 11 Championship games, found chances difficult to create despite their early dominance, until Jamie Paterson's superb strike struck both posts on its way past Alex Smithies for the opener.

After a brief Cardiff resurgence at the start of the second half, Joel Piroe finished off a wonderfully crafted one-two with Paterson to dink over Smithies for the second, and 14 minutes later, the latter turned provider again to tee up Jake Bidwell to add a third from almost on the goal line.

Swansea were left to celebrate the largest margin of victory in a South Wales derby since 2014, while McCarthy will wonder whether he will be given more time to prove he can turn things around at the Cardiff City Stadium.

Cardiff arrived in Swansea looking to frustrate their hosts and catch them on the break, and in an opening spell where they barely touched the ball they still carved out the best chance, as a long ball was worked to Kiefer Moore who found Ryan Giles, before Ben Hamer turned his gilt-edged chance behind for an early corner.

The Swans came into the match having registered the fewest passes into the final third of any Championship side but found plenty of opportunity to reach the Cardiff backline, before running into familiar difficulties around the opposition 18-yard box. That was until Paterson's wonder goal on the half hour, drifting into space from a recycled cross to beat Smithies from 20 yards with an unstoppable strike.

There were few more sights of goal before half-time, with Swansea entering the break having registered 78 per cent of possession against their already under-fire visitors.

McCarthy stuck with his five-man defence after the interval and for the opening minutes of the half, had reason to belief they could mount a comeback. Giles' corner was headed over by an unmarked Curtis Nelson at the near post as they began to wrestle back control of the midfield battle.

But their good work was undone on the hour, as Paterson again found space in front of the back five in a one-two with Piroe, who took his return pass superbly on his chest before showing real composure to dink it over Smithies' dive.

Cardiff's heads dropped and they sunk without trace with a mountain to climb. Korey Smith should have added a third when glancing a header well wide, before Olivier Ntcham was denied by Smithies after good work from Bidwell.

It was little surprise when the third goal of the afternoon came, although the manner of it will still have frustrated a Cardiff side who were now being embarrassed by their arch enemy.

Flynn Downes' long ball from near his own corner flag released the impressive Ethan Laird, who skipped past a half-hearted Sean Morrison challenge before finding Paterson. His chip looked to be heading for the far corner after beating Smithies but Bidwell made sure with a bullet header to wrap up a superb victory.

Flint spared his team-mates further embarrassment in the closing minutes, sliding in to deny Laird after the Manchester United loanee latched onto another long ball and looked set to pounce, but the damage was long done as Cardiff were seen off for the sixth game in a row - and perhaps the last under McCarthy's stewardship.