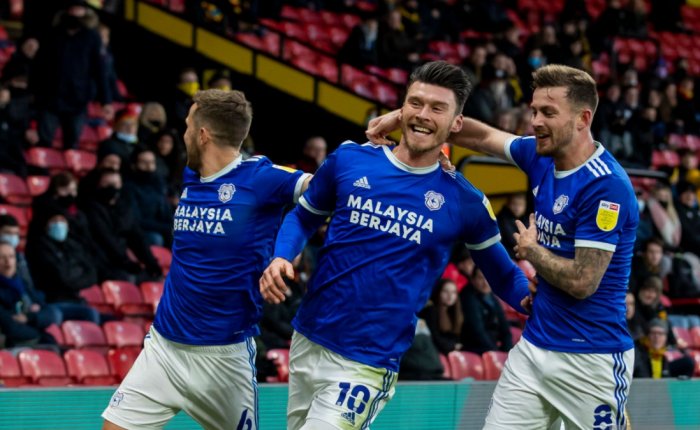 Moore struck the only goal after 43 minutes, reacting quickly to volley home after Watford failed to clear a corner.

It was Moore's fifth goal in five games and it capped a man-of-the-match display that gave improving Cardiff a third successive win.

Cardiff's display suggests they may yet be able to force their way up from mid-table and into the play-off race.

They were superior to a Watford side who have hit a slightly bumpy patch and have now lost the last unbeaten home record in the Championship.

They had won more points and scored more goals on their own turf than any other side in the division but have now won only once in five games.

The Vicarage Road stadium announcer offered the 2,000 returning fans "as warm a welcome as we've ever given you." But the team was unable to make their afternoon live up to that promise.

They had switched to a 3-5-2 formation and, at first, the signs looked promising.

With Ismaila Sarr given plenty of freedom to get forward and Jeremy Ngakia and Ken Sema pushing up the wings, Cardiff found themselves pushed back.

Their best early chance came when Watford goalkeeper Ben Foster misdirected a clearance to the feet of Moore, but the home defence was able to snuff out any danger.

But as the first half progressed, the visitors began to take control and a series of free-kicks were aimed by Harry Wilson towards the head of Moore. Watford had seen that coming and defended the first few well.

Perhaps the home side were concentrating too hard on Moore when Bluebirds captain Sean Morrison met Joe Ralls' corner after 39 minutes only to head wide.

But it was Moore who reacted first as Watford failed to clear another corner after 43 minutes, hooking the loose ball into the bottom corner.

The Hornets looked for an immediate reply and James Garner drove an inviting free kick into the Cardiff six-yard box, but no team-mate was able to stretch out a foot to stab the ball home.

Watford came out for the second half with much more purpose and they too had a series of free kicks in promising positions but neither the delivery nor the movement in the penalty area were good enough to unsettle Cardiff.

Joao Pedro, quiet for the first hour, escaped Morrison for once after 69 minutes and shot from close in only to see Morrison recover and block his angled effort.

That was as good as it got for the home side, who flung some more hopeful balls into the Cardiff penalty area but to no avail.