Javi Gracia's side win for the first time since October thanks to two stunning goals from Gerard Deulofeu and Jose Holebas after late fight back from Neil Warnock's men, write the Daily Mail

From Gerard Deulofeu, we have seen this performance before. These are the days that Watford's Catalan winger summons all the invention, speed and trickery that he learned at Barcelona's La Masia academy, bewitching opponents and bedazzling his side's supporters.

Amid the biblical storm of wind and rain at Vicarage Road, the conditions did not seem ideal for the fleet-footed Deulofeu, particularly against Cardiff's aggression and physical prowess. Yet here Deulofeu confounded the stereotypes, retaining true to his upbringing and outplaying Cardiff at every turn. 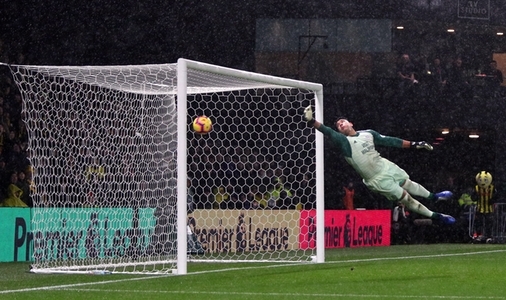 His goal, breaking the deadlock on 16 minutes, was as marvellous an individual goal as we will see all weekend. After Watford won the ball back in Cardiff territory, Deulofeu collected the ball and scuttled with menace towards the Watford defence. As he drove on centrally, Roberto Pereyra made the overlapping run to his left and the home support were baying for the pass to release the Argentine.

Yet Deulofeu did not take the easy option. He rarely does. He burrowed his head downwards and sauntered into the penalty area, showcasing close control and poise to tiptoe magnificently around Sean Morrison and Bruno Ecuele Manga. As a route to goal opened up, Deuolfeu picked his spot, caressing the ball beyond Neil Etheridge in the Cardiff goal.

The challenge now for Deulofeu is to harness his talent more regularly. He is 24-years-old and at a point of maturity. To play well once every few weeks is no longer sufficient. Take, for example, the month of November, when Watford took only one point, the team scored only one goal and Deulofeu was substituted before the 70 minute mark on three occasions. Manager Javi Gracia then dropped his compatriot to the bench for the last two matches against Manchester City and Everton.

This was some response and it was a much-needed victory for Watford. Despite an excellent start to the season, Watford have endured a sticky patch, failing to win their last six Premier League games. Yet there were signs of improvement in the draw at Goodison Park on Monday evening and this was a dominant performance decorated by three picturebook goals. Yet vulnerabilities remain, as shown by the manner in which they somehow transpired to concede twice late on and turn a procession into a contest.

Still, this victory elevated Watford back into the top half of the Premier League and to within only two points of Manchester United in 6th place.

Cardiff, it should be said, were generous opponents. Cardiff have put together a run of form at home but their travels remain miserable and back-to-back top flight wins for the first time since 1962 did not appear likely. Cardiff have lost all but one of their away matches this season - a 0-0 draw at Huddersfield - and have scored only three goals. Here they did not have a shot on target until the 80th minute, when Junior Hoilett scored a wonderful goal of his own. Watford were superior in every department. Their passing was crisper, their attacking play more incisive and their pressing more unified.

Deulofeu had provided warning of his talent before Watford took the lead, as he exchanged passes with Abdoulaye Doucoure and curled narrowly wide of the post. Watford have won every game this season in which they have scored first but Cardiff did briefly threaten. Harry Artur's cross narrowly eluded Josh Murphy but this was as good as things became.

Watford, by contrast, continued to shine. Deulofeu deceived two defenders, passed inside towards Troy Deeney, who dummied to release Pereyra, who was denied at pointblank range by Etheridge. The Cardiff goalkeeper offered further resistance, stretching to his right to deny Pereyra from a free-kick and then down low to save again from the same player early in the second period.

The goalkeeper, however, would have required superhuman powers to stop Watford's second, as Deulofeu teed up Jose Holebas and the left-back struck first-time from 25 yards and send the ball bending at speed into the top corner.

Watford were by now rampant and the third came in the 68th minute as Ken Sema back-flicked to tee up midfielder Domingos Quina, who produced a finish of the highest quality. At 19 years and 27 days, Quina is now the youngest goalscorer in Watford's Premier League history.

The Cardiff travellers retained a sense of humour, performing a rendition of Wham!'s 'Last Christmas' to defender Sol Bamba and then singing 'We're going to win 4-3 after falling three goals behind.

Incredibly, the ironic chants briefly had foundation. The game appeared dead and buried when Hoilett struck the first consolation goal but two minutes later, Watford had reduced the deficit to only one goal, as a long-throw caused problems in the Watford penalty area and substitute Bobby Reid poked out a leg to create a tense finish.