Two red cards were shown at the final whistle as tempers boiled over at the end of the 1-1 draw between West Brom and Cardiff at The Hawthorns. 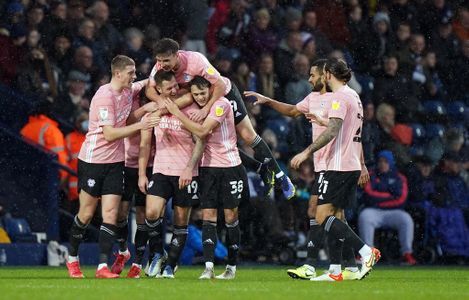 Callum Robinson cancelled out James Collins' 34th-minute opener to earn Albion a point, but the scoring was overshadowed by disciplinary incidents.

The Baggies had already had midfielder Alex Mowatt sent off as their stuttering form in the Sky Bet Championship extended to three games without a win.

West Brom goalkeeper Sam Johnstone and Cardiff defender Aden Flint were then dismissed at full-time after a melee involving most of the players, following an alleged push from Cardiff's Marlon Pack on Conor Townsend in the Bluebirds' penalty area which referee Thomas Bramall decided was not worth a spot-kick.

The mass confrontation seemed to be sparked by Albion head coach Valerien Ismael marching onto the pitch, which preceded the latter two dismissals.

Albion had missed two early chances to take the lead. Karlan Grant cut inside from the left and crashed a fierce, low drive wide of the far post and Robinson went even closer with a superb curling shot that was met by an equally fine one-handed save from goalkeeper Alex Smithies.

Cardiff's first threat came in the 34th minute - and within seconds, they took the lead.

Joe Ralls' stabbed effort deflected just wide off Matt Clarke after Cedric Kipre headed away a long throw-in, but Collins beat Clarke to meet the resulting corner swung in by Ralls with a glancing header past Johnstone.

New Albion signing and United States international Daryl Dike was paraded in front of the crowd at half-time.

The 21-year-old striker's presence seemed to have the desired effect as the Baggies equalised in the 48th minute. Grant produced a superb reverse pass to pick out Robinson, who kept his cool to beat Smithies with a left-footed finish.

West Brom substitute Grady Diangana was quick to make an impression. The winger stung the fingers of Smithies with a rising shot, then saw his follow-up from the rebound headed away by Flint.

The game had opened up and Cardiff responded with a Will Vaulks shot that flew over the bar, before Ralls sliced high and wide.

Vaulks was then the victim of a lunging tackle by Mowatt on the touchline which saw the midfielder sent off 14 minutes from time - and then came the fireworks at the final whistle.