Nathaniel Mendez-Laing kept Cardiff at the top of the Sky Bet Championship table as his second-half strike earned them a 2-1 win against Wolves at Molineux.

Both sides had been defending 100 per cent starts to the season, but Wolves had to surrender theirs following a pulsating second half.

Joe Ralls pounced to give Cardiff a deserved lead in the 54th minute but Wolves looked to have rescued a point when Leo Bonatini drew them level after 67 minutes. However, Mendez-Laing, who started his career at Wolves, secured the points for Cardiff with an emphatic piece of finishing 13 minutes from time. 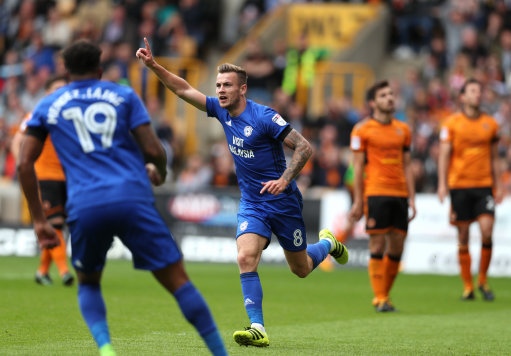 The Bluebirds were the first to threaten and were unfortunate not to break the deadlock after forcing two openings in the space of 60 seconds. Wolves goalkeeper John Ruddy did well to turn away a fierce low drive from Junior Hoilett in the 16th minute. And from the resulting corner, Hoilett crossed for Sol Bamba, whose towering header crashed off the crossbar before being cleared to safety.

Bamba again came close with a header from a Joe Ralls cross five minutes later, only to this time see his effort drift wide. Wolves were struggling to mount a threat of their own in the opening exchanges and when they did, Bright Enobakhare saw his 25-yard strike fly over the bar in the 24th minute before he dragged a second effort wide 15 minutes later.

A tetchy game then threatened to explode on the stroke of half-time when both benches got involved after Cardiff's Loic Damour left Romain Saiss on the floor. Damour escaped with a yellow card - Cardiff's third caution of the half.

Having looked by far the more dangerous side in the first period, Cardiff finally made their pressure pay through Ralls. Kenneth Zohore fed Hoilett and his low cross from the left wing was deftly rolled past Ruddy by Ralls from 12 yards.

Zohore then had two chances to make the game safe only to be denied by Ruddy, and that proved to be pivotal as Wolves drew level moments later.

Cardiff goalkeeper Neil Etheridge could only parry away a long-range drive from Ivan Cavaleiro and when Diogo Jota lofted the ball back across goal, Barry Douglas let fly with a fierce drive that was deflected home from two yards by Bonatini.

Despite surrendering their advantage, Cardiff rallied and Mendez-Laing secured the victory thanks to a neat through ball from Zohore. He raced on to the pass and drilled an unstoppable drive beyond the despairing dive of Ruddy.