Wycombe picked up a valuable three points in their fight against relegation from the Sky Bet Championship, as headers from Ryan Tafazolli and David Wheeler gave them a 2-1 win over Cardiff. 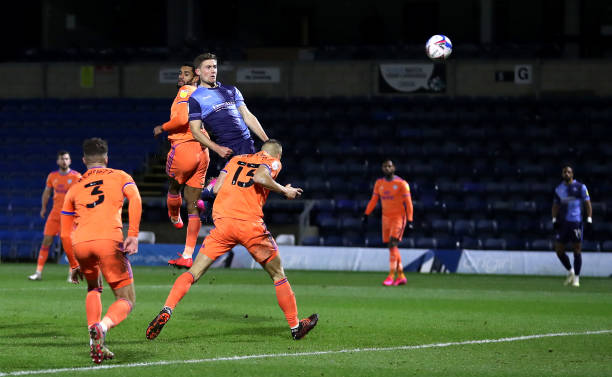 Tafazolli powered in from a corner after half an hour, before Wheeler wrapped up the points in the second half, rounding off a sweeping move from close range.

Cardiff created very little, falling to a third straight defeat for the first time under Neil Harris - who suffered the further ignominy of being sent to the stands late on.

But they did pull a goal back in stoppage time through Junior Hoilett's header.

It was a vital result for Wycombe, who came into the game without a win in 11 but looked the better side throughout.

Uche Ikpeazu led the line with power and guile, and his hold-up play brought the first chance - a powerful drive by Anis Mehmeti that was bravely blocked by Curtis Nelson.

Ikpeazu's other major impact was less spectacular, though perhaps more significant - a late challenge ending Cardiff captain Sean Morrison's evening after just 20 minutes. Leicester loanee Filip Benkovic came on to make his debut and endured a torrid time in the heart of defence.

When the goal came it was Cardiff fan and academy graduate Joe Jacobson who provided the moment of quality for Wycombe.

His delivery has so often been the Chairboys' chief weapon and his corner just after the half-hour mark was begging to be attacked. Tafazolli obliged, towering over Benkovic at the back post and thumping a header past Alex Smithies to open the scoring.

Despite their possession, Cardiff produced few clear-cut chances. The only save Wycombe 'keeper Ryan Allsop had to make before half-time was a comfortable one from a 25-yard Harry Wilson drive.

Allsop was a little busier after the break, however. First he parried Sheyi Ojo's stinging drive, straight to Wilson, who should have equalised but fired over.

Wilson again went close, this time sliding the ball wide when through one-on-one, although Cardiff claimed his effort was hampered by unfair pressure from Josh Knight.

Just when Wycombe looked like they might be absorbing too much, they doubled their lead. Daryl Horgan was heavily involved in an excellent move, which culminated in Garath McCleary crossing for Wheeler, who stole in unmarked and headed into the net.

Cardiff lacked any ideas to get them back into the game, launching the ball into Wycombe's box several times but never producing a chance of any note until Hoilett found the net, via the inside of the post, with what was almost the last touch of the game.

The win, Gareth Ainsworth's side's third of the season, is not enough to lift Wycombe off the bottom of the table, but it does keep them within touching distance of their relegation rivals.