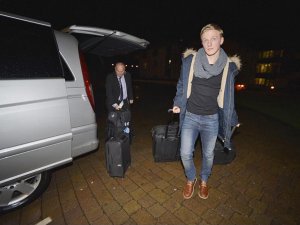 Ole Gunnar Solskjaer is set to sign two of his former players.

As reported yesterday Magnus Wolff Eikrem watched Cardiff's 2 - 1 win at Newcastle and his club Heerenveen have acknowledged he is due to leave the Dutch side.

On Sunday evening Mats Møller Dæhli, also a young attacking midfielder - aged 18, flew to the UK and was pictured arriving in Cardiff.

Daehli is a product of the Man Utd Academy and is currently with Molde, the club that OGS left to join Cardiff.

Molde director Tarje Nordsrand is reported to have said

"We are in talks with Cardiff and those talks are constructive.

"We have agreed on most parts of the transfer."

Daehli was called up to the Norwegian national side at the end of 2013.

Both players are thought to be undergoing medicals in Cardiff.